Daniel Throssell behind a bush listening to 2 Spanish copywriters

This is a true story:

On Friday 22nd of October, I was on a Spanish terrace in the sun, sipping some vermouth (not that nasty Johnny Walker whisky thing) and sitting in front of another Spanish copywriter:

Lately, both of us were talking a lot about this new aussie copywriter: 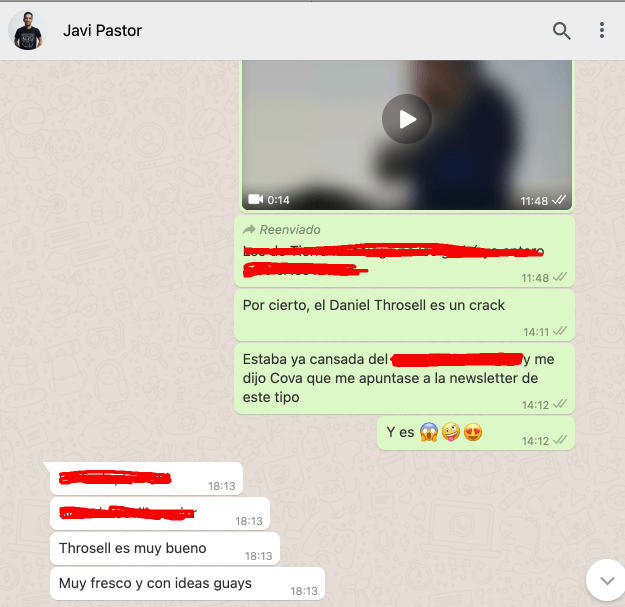 By the way, in Spain we say that somebody is a “crack” when you mean that he is The Goat. Not when he is a drug addict. 😅

The thing is that Javi Pastor knows Daniel Throssell (or at least that's what he claims). So I invited him to tell him the news.

-You know Javi, I must tell you something…

-Daniel Throssell just signed up on my email list.

-Whaaaaat? Are you kidding me?

By the way, I’m not even joking. When I saw Daniel Throssell was on my list, I was like:

But, ahem... Let’s continue with the conversation with Javi Pastor, shall we?

-Wow, and what are you going to do? - Javi replied totally amazed.

-Well I am going to send him all my emails in Spanish, so he can see that I write a lot of emails and follow his rule 78 of his Email Copywriting Compendium.

-You just made that up.

-Of course not. - I replied with a bloody serious face.

-Yes, he is against the non native people, so he is gonna suck it up and take his own medicine.

At this point of the conversation, my face is turning a bit evil and Javi doesn't know what to say. So I follow:

-I might write some emails in English for him also.

-Be careful, he is a sensitive aussie. As you already said, he doesn't like non native people. Men call him Hitler, although I think he is taller.

I knew I was taking a big risk writing in my no fluent and veeeery baaaad Dutchie-Spanish English.

But hey, not every day you get a Throssell on your list. So I told Javi:

-Risk it for the biscuit, baby.

-Okay... And to be clear, what is the biscuit in this case?

-I want him to actually read my emails, and the only way to achieve that is to write emails in my poor English. And of course, to tease him and mess with him a little bit. You know he likes drama more than anything.

-Shh, what's that? - I replied pointing to a bush near us.

We both stared for a while. Something was moving.

Suddenly, Daniel Throssell comes out of the bush with... A bottle of whisky.

-What?- I managed to say stuttering.

-Ehm.. You know… I was just casually passing by… I was not listening to your conversation, obviously.

-And what about that bottle you have?

Okay, Daniel, I know I have caricatured you as an alcoholic copywriter with a bad taste, but hey...

In my defense I have to say that I have used several of your rules from the Email Copywriting Compendium (you know better than me which ones).

I'm going to rest my neurons. As a non native, so much writing in English has exhausted me.

Until then, I will continue with my vermouth (and you with your limited edition of your stinky Johny Walker whisky).

And as English native people say: